This NVAO Update is dedicated to the NVAR-West Reunion. Following is a report on the Reunion, written by Don “Quacker” Jenkins. Don and his wife JoEll put on the Reunion and by all reports….it was fantastic. Attached are some photos from the Reunion… Here you go!

“The NVAR-West Reunion had a good turnout and was a lot of fun.

Friday the 9th was the meet and greet at the Jenkins’ house. It was just fun to see everyone in a relaxed atmosphere. We had dinner here that was chili by Ray Adams, garlic bread by Butch Schroeder and crab and hot dogs by Randy Texley and hunting partner Dave Dorenath. There were plenty of soft drinks and adult beverages for dinner. There were 43 for dinner. On one of our test rides Butch Schroader invited Matt Bricka. Turns out Matt and his wife, Laquida, met in Iraq and he is a purple heart recipient and they both work in a hospital currently. Headdog brought medals with him so we were able to present both Matt and Laquida medals and welcome them home. What a great way to end our first day.

Saturday the 10th. Breakfast was at Shari’s

Restaurant next to Motel 6 in Roseburg. After we ate we had a rider safety meeting and went over the ride for the day. Shellee Jenkins drove the chase truck and trailer in the rear. The route took us to Sutherlin to Highway 138 where we took a little 2 mile side trip through a newly restored covered bridge. On to the main Umpqua river to Elkton to the coast. We took a restroom break at the boat marina in Winchester Bay. It was a short stop then went south on 101 to the Dewitt Memorial on the bay at Coos Bay. Shellee had brought long stem flowers  so we could all lay a flower at the base of the memorial. Bill Luft brought all to attention and a salute. A small memorial by a small town, was nice to pay a little respect and remember the fallen. Never forget. 27 bikes on this ride.

Lunch was at the Coney Station in Coos Bay where they specialize in fish and chips and clam chowder. They weren’t ready for us like I would have expected but it gave us a little more time to BS. The food was excellent as always.  After lunch we rode the highway paralleling the bay to Charleston, crossed the bridge to Sunset Beach and to Shore Acres  State Park.  We spent some extra time in the park, not just to see the ocean but the flower gardens. This park is special. Leaving the park a fast car may have been a factor in causing three bikes to lay down. Luckily no one was hurt. After regrouping on to Coos Bay on a back road I swear was made for bikers like us, FUN. Gassed up in Coos Bay and took Hwy 42 east to Roseburg, another good bike road. Temps all day had been in the mid 60’s until we got into the Umpqua Valley where it was in the 90’s. A very good 200 plus mile ride.

For dinner Saturday eve we have my cousin  Randy Texley, a Army Vet,  Dave Dornath and Kenny Carpenter, all of which I’ve known for many years. When I asked Randy if he would cook fish for us he said ” I’ll not only cook it I’ll catch it “. Then Dave jumped right in and said he’s coming too, and then Kenny heard about this and jumped in too saying ” I cook fish differently than you do and I’ll do tater tots too”. Jokingly I told Randy that it would be nice if we had some crab also, his reply was well I’ll throw the crab pot in on the way out fishing.  And then JoEll ordered corn on the cob from the farm next door for all three dinners.These three guys pretty much catered our dinners. WE CAN NOT THANK THESE THREE GUYS AND JOELL ENOUGH! Oh desserts, JoEll had a patriotic cake like a flag made, Joni Anderson brought a cobbler, somebody else brought another cobbler (I’m sorry I don’t know who to thank) Headdog had certificates made for Randy, Dave, Kenny and JoEll. The food was just crazy good.

Sunday 9/11. After breakfast we went to Maj. General Carl’s memorial less than a mile from the restaurant. Maj. General Carl was the most decorated Marine aviator in history. He fought in three wars and was a triple ace, having shot down 18 enemy aircraft. This was just one of his many awards. Maj. General Carl and his wife lived in Roseburg and were both shot by an intruder while the General was fighting off the intruder to save his wife. She survived but the General did not. We all laid a flower at his memorial and Bill Luft brought us all to attention and a salute. Fred Young was nice enough to say a prayer before we left.

We rode North to Wilbur then East on the North Bank road heading to Diamond Lake. As we got near Glide I noticed some smoke up the hill where we were heading so I decided to call the Lodge to see how bad it was at the lake. They said it was too bad and not to come, so we went to plan ‘B’. John Jenkins took the lead cross country south to Canyonville where we ate lunch, half at the casino and the rest at Ken’s Sidewalk Cafe. We all decided to call it a day and head back to Roseburg. Around 4 people started gathering at the Jenkins where Randy, Dave and Kenny were  already prepping dinner.  Pulled pork, corn on the cob, salad, crab and more desserts.

There was so much stuff donated for the raffle that I gave a couple things instead of one. Oregon Tool donated countless tee shirts and screwdrivers, Randy Texley donated countless coffee cups and drink tumblers. JoEll and I donated some U of O Duck things. Milo Anderson won the 50/50 for $335 and was quick to give it to JoEll and I which we then gave it to Randy, Dave and Kenny for all the food they had prepared for the reunion. I’m still not sure if that was enough money to cover their expenses. The next morning they said they really enjoyed cooking for our group and they have already decided on the menu for next year, LOL.

Monday 9/12. JoEll and I made breakfast of French toast, bacon and coffee for any who wanted before heading home. What a wonderful way to end the reunion.

Milo Anderson went above and beyond for this reunion. He not only went to Eugene to pick up Headdog and Silvertop at the airport, he loaned them each a Harley to ride for the reunion weekend. And then took them back to the airport to fly home. A big thank you goes out to Milo.

Now that this is all done I can’t say there weren’t any glitches. I was so proud and happy to have hats made and getting them on time until it was pointed out the V and A were reversed. I could have crapped my pants at that point, but had to roll with it. Good thing I have broad shoulders and a sense of humor. I was told that I could be famous for a while. So in Oregon 2022 we were the NAVR-West. Crap!

After doing this reunion I have a whole new appreciation for what Jerry Conner and all the state coordinators do to make the NVAR what it is today. Thank you all and see you in May 2023.” 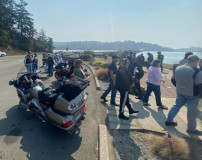 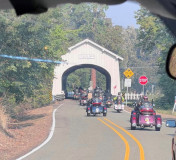 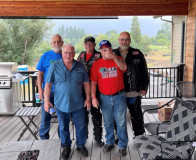 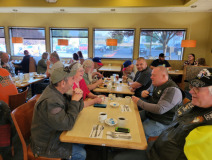 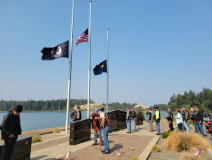